John Dawson, 1st Earl of Portarlington commissioned the building of Emo Court in 1790 although the house was not finally completed until 1870, eighty years later. Emo Court is one of only a few private country houses designed by the famous English architect James Gandon. In the early 18th century, Ephraim Dawson, a wealthy banker, after whom Dawson Street in Dublin is named, purchased the land of the Emo Estate and other estates in the Queen’s County (Co. Laois). His grandson, John Dawson, was created 1st Earl of Portarlington in 1785. Three years later, he married Lady Caroline Stuart, daughter of the Earl of Bute, who was later Prime Minister of England. John Dawson commissioned Gandon to design Emo Court in 1790.

The gardens and parkland were first laid out in the 18th century and are renowned for their sweeping formal lawns, statuary and fine tress. Woodland walks include 1.5km long Wellingtonia Avenue, flanked by giant sequoias.

Emo court remained the seat of the Earls of Portarlington until 1920, when the house and its vast demesne of over 4500 ha, (11,150 acres), was sold to the Irish Land Commission. After the Phoenix Park in Dublin, Emo Court was the largest enclosed estate in Ireland. The house remained empty until 1930 when 150 ha., including the garden, pleasure grounds, walled garden, woodland and lake were sold to the Society of Jesus for a novitiate. The Jesuits made several structural changes to the building to suit their purposes, including the conversion of the rotunda and library as a chapel. The distinguished Jesuit photographer, Fr Frank Browne lived at Emo Court from 1930-57. A notable novitiate was the Irish author, Benedict Kiely.

The Jesuits remained at Emo until 1969 and the property was eventually sold to Major Cholmeley Dering Cholmeley-Harrison. He embarked upon a long and enlightened restoration, commissioning the London architectural firm of Sir Albert Richardson & Partners to effect the restoration.

Choose a room to explore via the menu on the left, or simply scroll down.

The entrance front has a seven bay centre with a giant pedimented Ionic portico. This carries the coat of arms of the Earls of Portarlington. End pavilions of single storeys beneath blind attics flank the centre. These carry panels of Coade stone reliefs. The panel on the right pavilion represents the Arts. On the left pavilion is a pastoral scene. On either side of steps are two heraldic tigers, supporters of the Portarlington coat of arms. These are made of re-constituted stone and date to 1854. 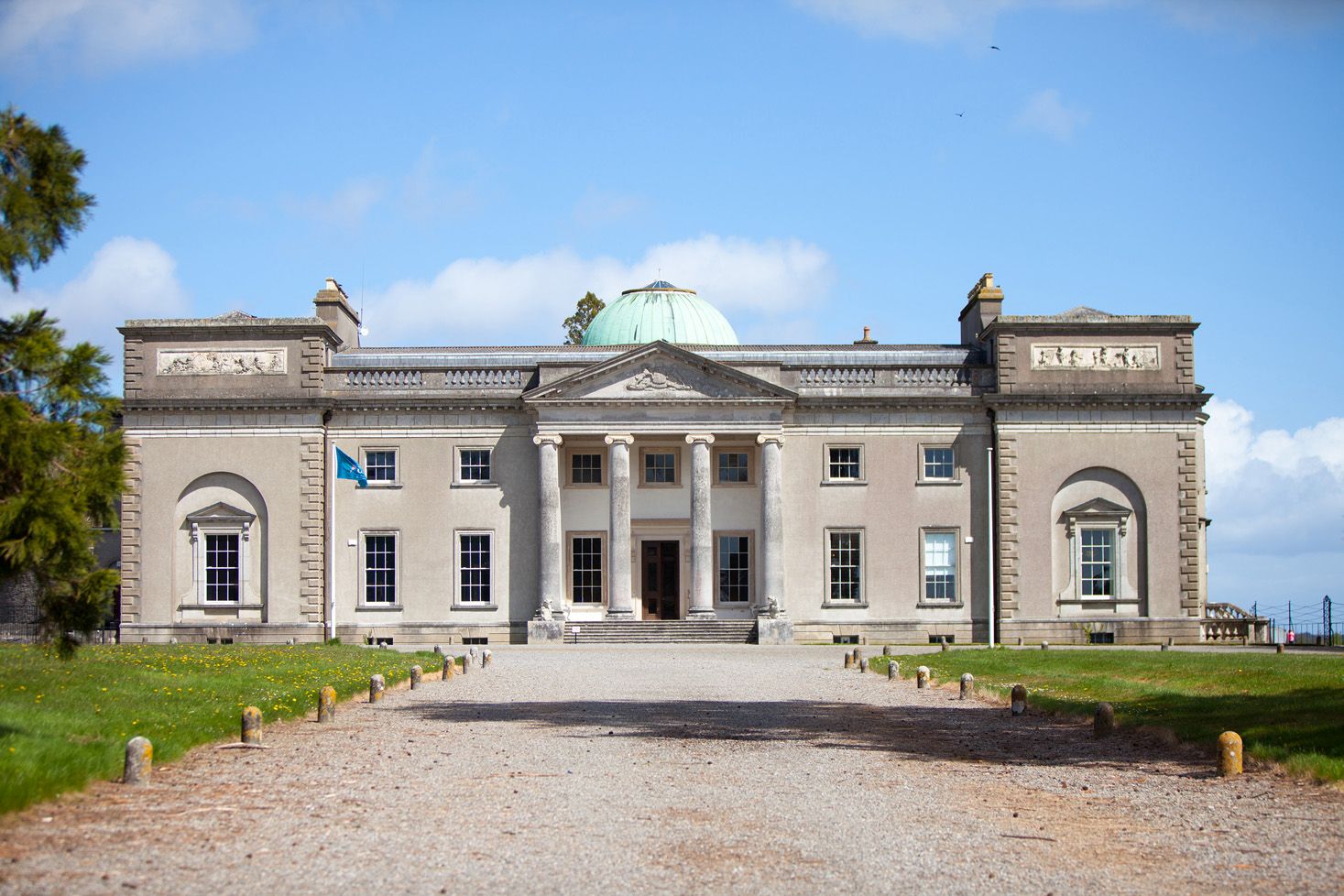 The plasterwork on the ceiling of this room depicts rivulets of oak leaves, in keeping with the numerous oak trees on the estate. The lantern dates to the 19th century. Four internal doors angled on each corner provide the room with a sense of symmetry although two of these doors are actually false and were put in solely for effect. Geoffrey Ghin painted two coves on either side of the room in trompe l’oeil (to deceive the eye) for Gandon’s unexecuted design for stuccowork. In the 19th century, Lady Portarlington commissioned embossed leather for the walls and this hung here until the 1960s. Major Chomeley-Harrison commissioned the two classical urns on view to Gandon’s design. He also donated eight matching urns to Coolbanagher church. 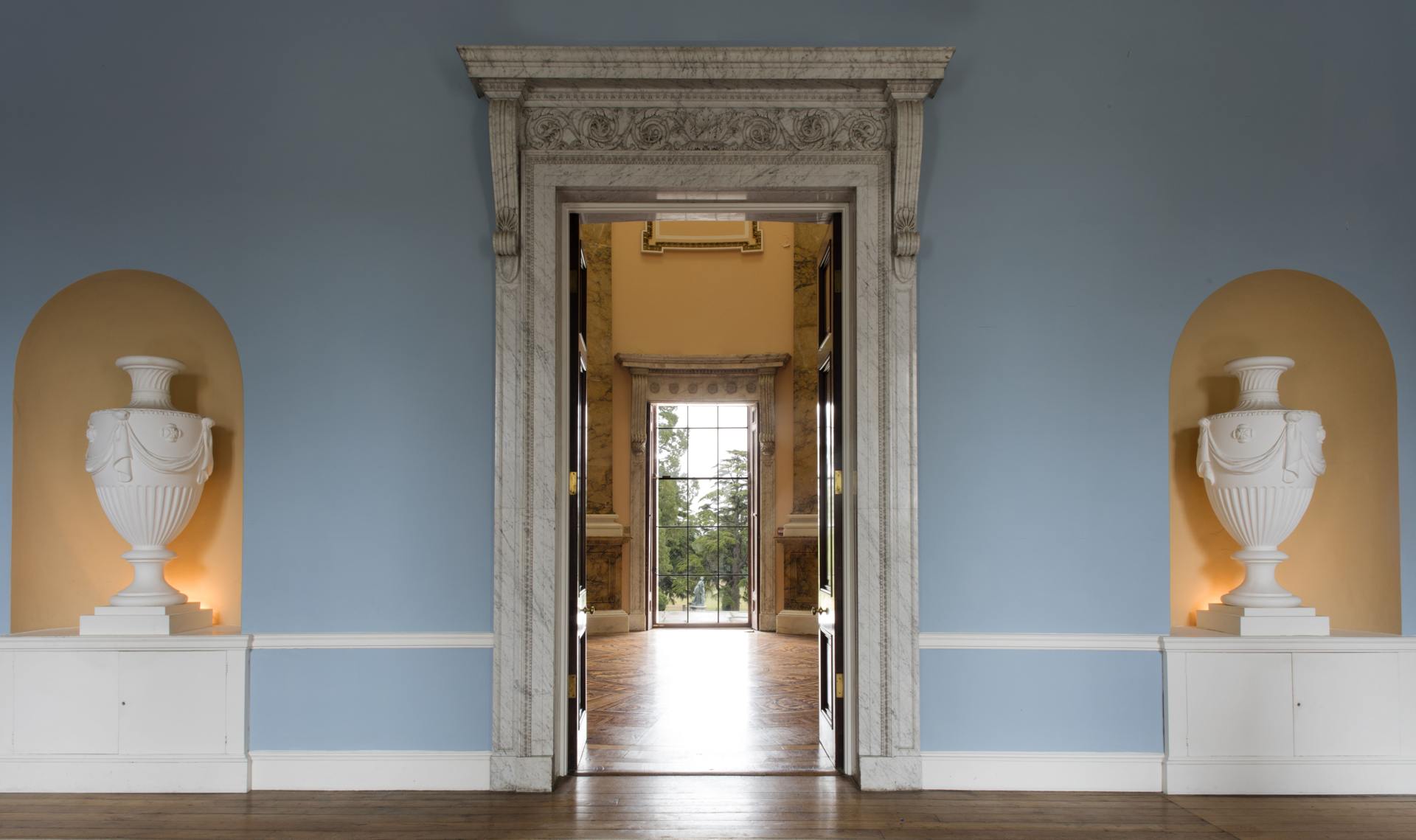 The rotunda or marble salon with its double height dome and coffered ceiling was built about 1860 by William Calbeck as a display of beauty and taste. It functioned mainly as an anteroom. During the years of Jesuit ownership, the rotunda and library were converted into a chapel. This resulted in several structural changes, which Major Chomeley-Harrison has now reversed. The rotunda became the sanctuary and the library became the main body of the chapel. This necessitated removal of two of the Corinthian Sienna-marble pilasters with their gilded capitals from the rotunda, as well as the 3m. mahogany double doors and the rococo chimneypiece of Carrera marble from the library. Part of the richly inlaid parquetry floor including the Portarlington coat of arms was removed from the rotunda, to be replaced by the altar, positioned beneath the dome. Today, the Chomeley-Harrison coat of arms is inlaid in the floor as a hallmark of his contribution to the history of this house. The Portarlington coat of arms, mounted on the central table, shows the heraldic coronet of the Earls of Portarlington inlaid with mother of pearl.

During the restoration, the demolished wall of the rotunda was rebuilt and Sienna marble was sourced from Italy to replace the two marble pilasters. The mahogany doors, which had become badly warped, were flattened and returned to their original position. In the library, the rococo chimneypiece, alive with vines and bacchanals, was reinstated to its original position and the oak panelling erected when the room served as a chapel was removed. 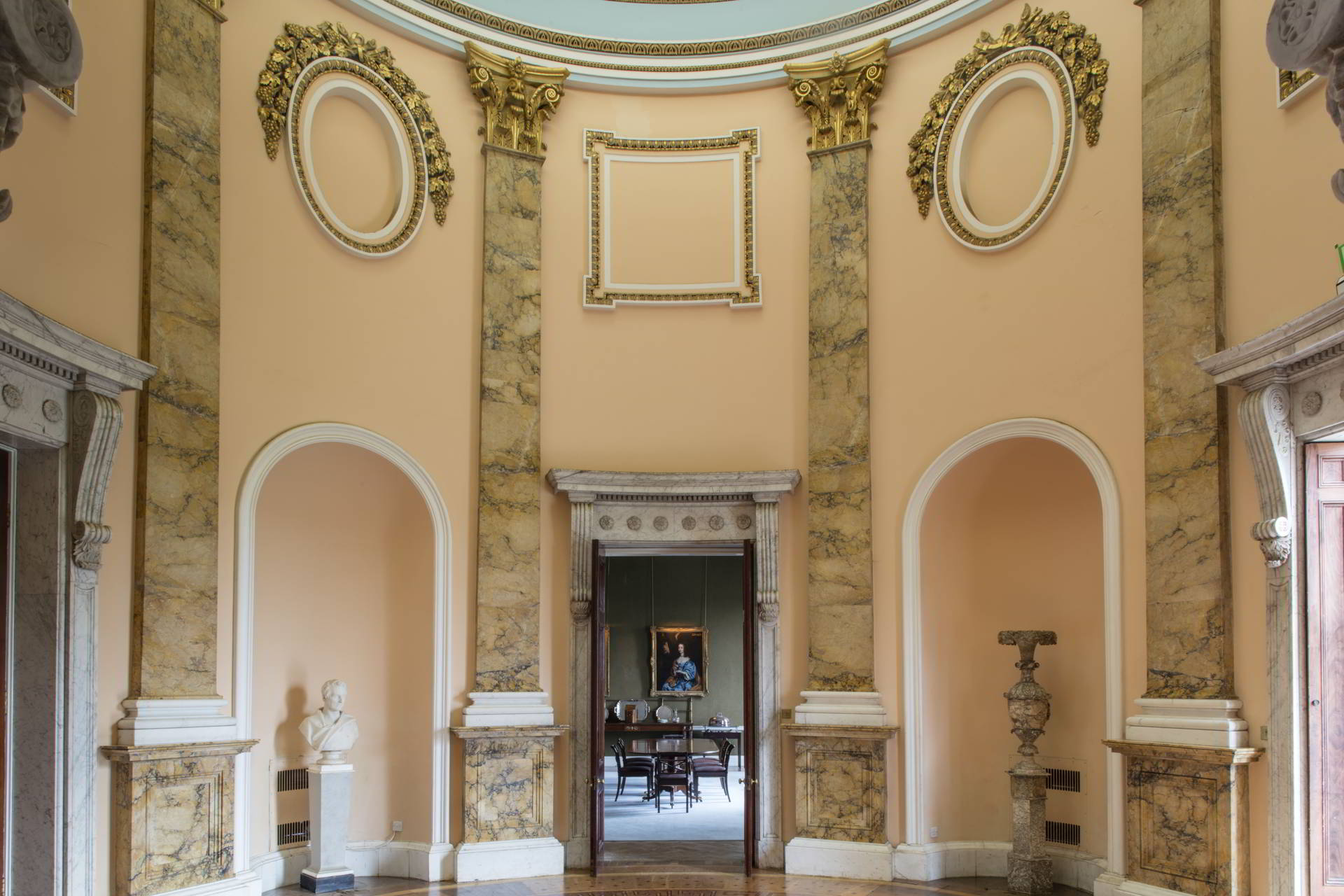 The library, which originally had been built as a drawing room, had been completed during the lifetime of the 3rd Earl of Portarlington. At that time the walls had been hung with damask silk. The ceiling dates from around 1874 and is covered with bold and sinuous rococo decoration in dull gold. The furnishings are of mid-20th century fashion, a style of grand country living in the 1930s-40s. 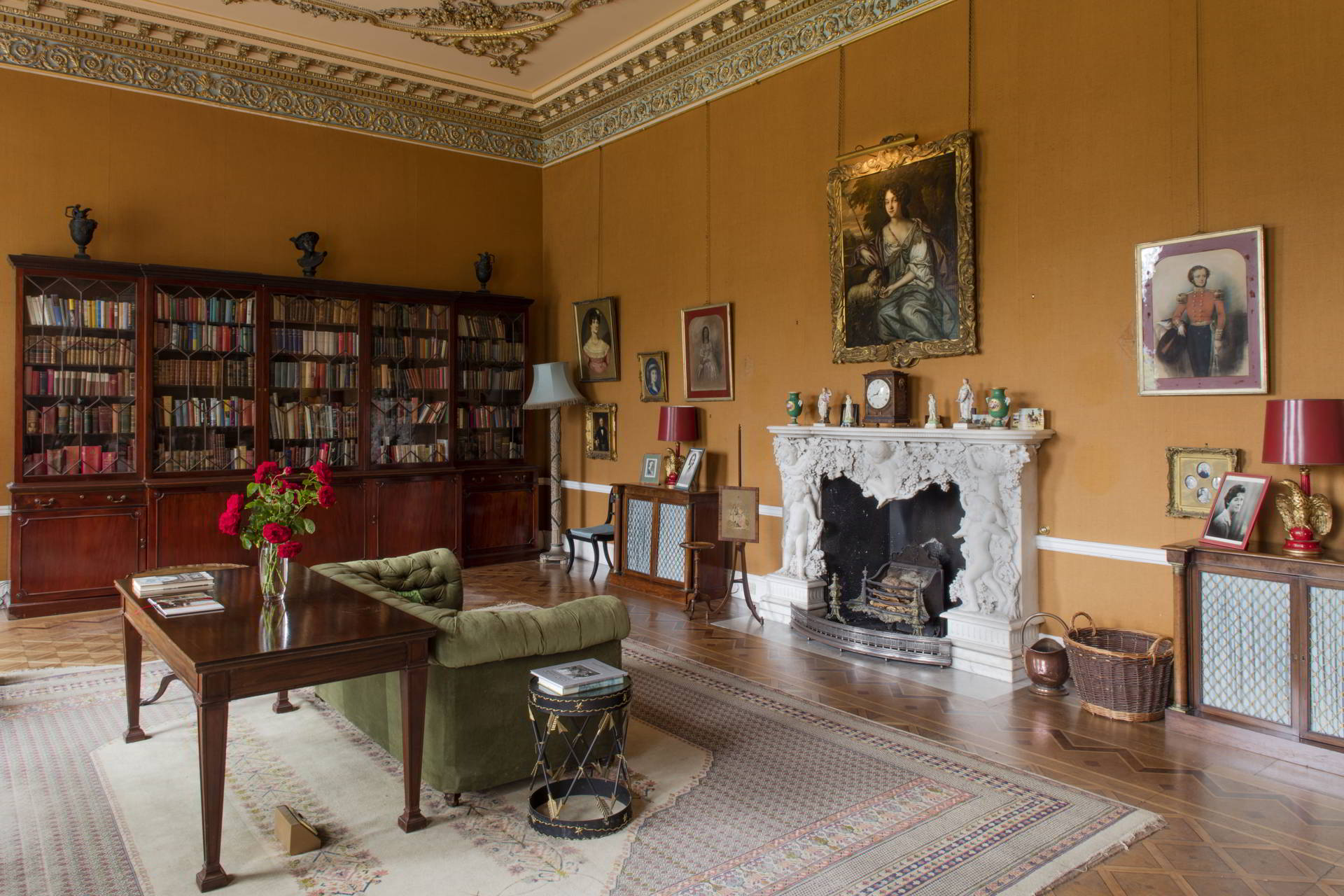 The dining room has now been restored to its original function having served as a conference room in the days of Jesuit ownership. The ceiling is particularly handsome with 1830s plasterwork by Lewis Vulliamy for the 2nd Earl of Portarlington. The triple pod table and chairs were made by James Hicks of Dublin. Hicks also made much of the furnishing in the Dail and Seanád in the refurbishing of Leinster House in the early days of the Irish Free State. Other fine examples of his work are in Áras an Uachtaráin, the Four Courts and in some Irish embassies abroad. 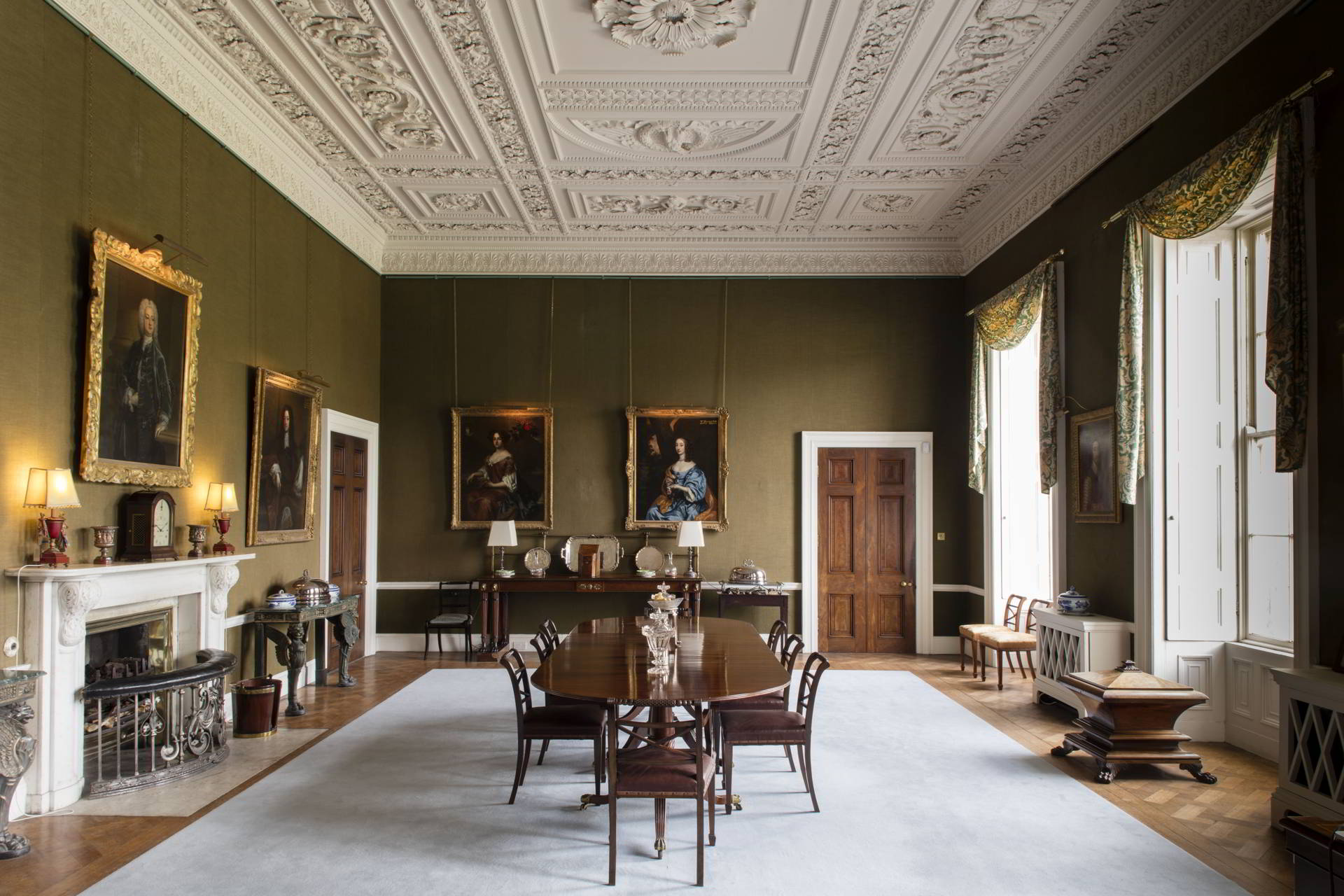 This room, with its proportions of a long gallery, runs from front to back of the house. Built originally as a library, which also doubled as a ballroom, it is divided into three by four-quarter walls with four green marble Ionic columns topped with gilt capitals. These walls and columns were removed by the Jesuits to facilitate the use of this room as a refectory. The gilt wood valences and the central brass lantern date to the 19th century. The gable end wall extends into a wide curved bow in the middle of the room and affords views over the gardens. 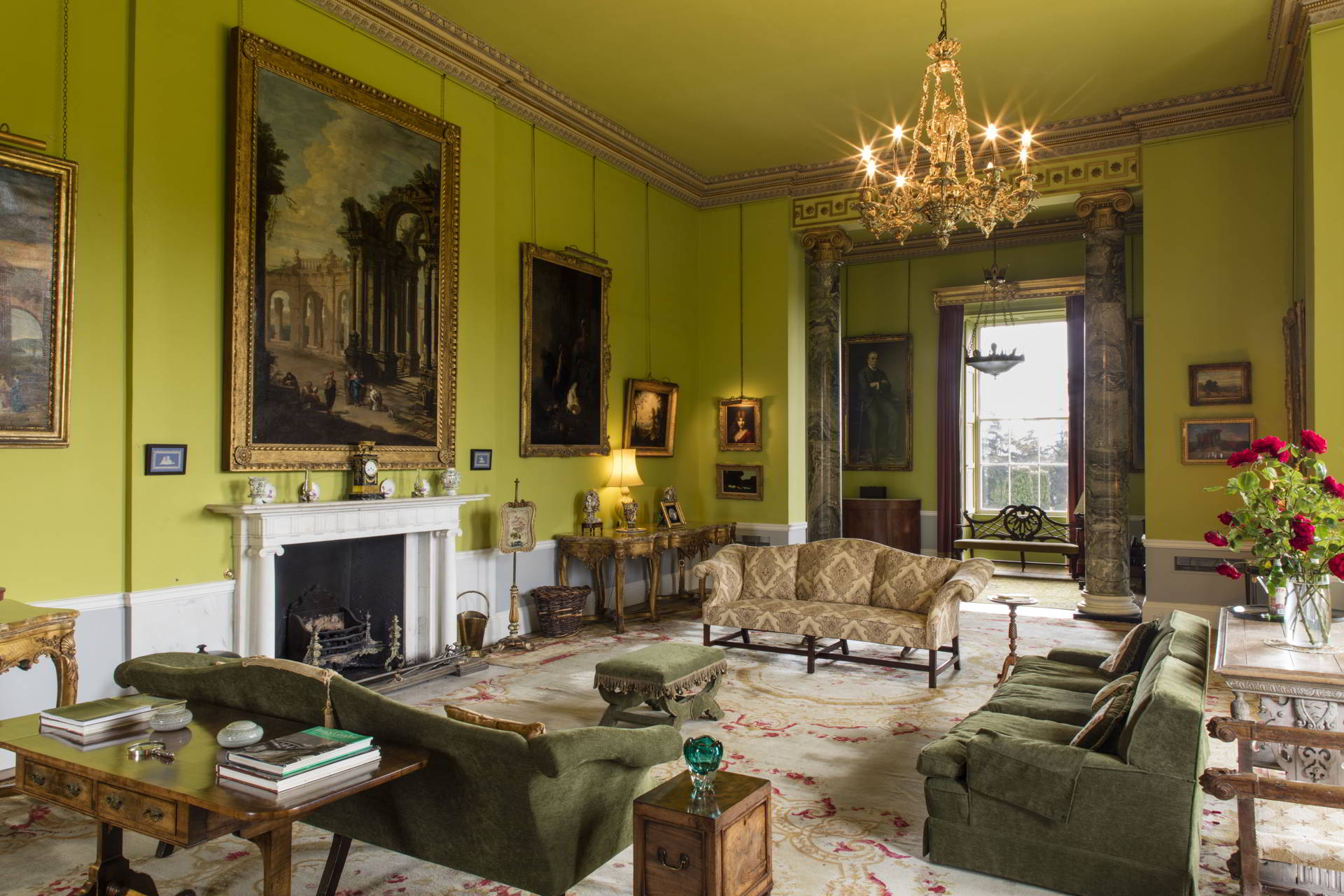 Originally a billiard room, Chomeley-Harrison has divided this room into a study and cloakroom. 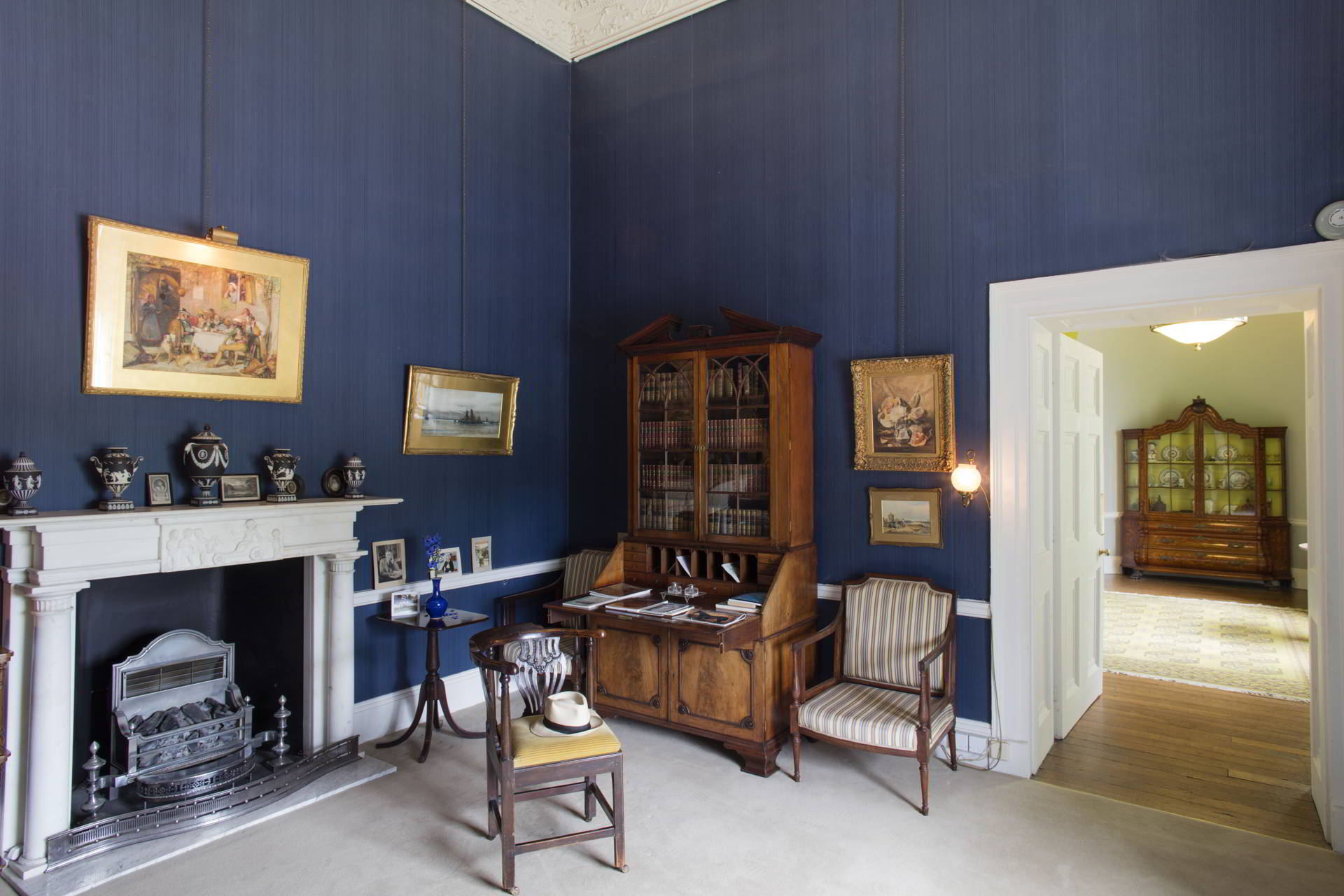 Characteristic of Gandon’s building design, the cantilevered staircase was placed in a discreet area of the house, away from the main reception area. In all his houses, it is located to the right of the entrance hall. 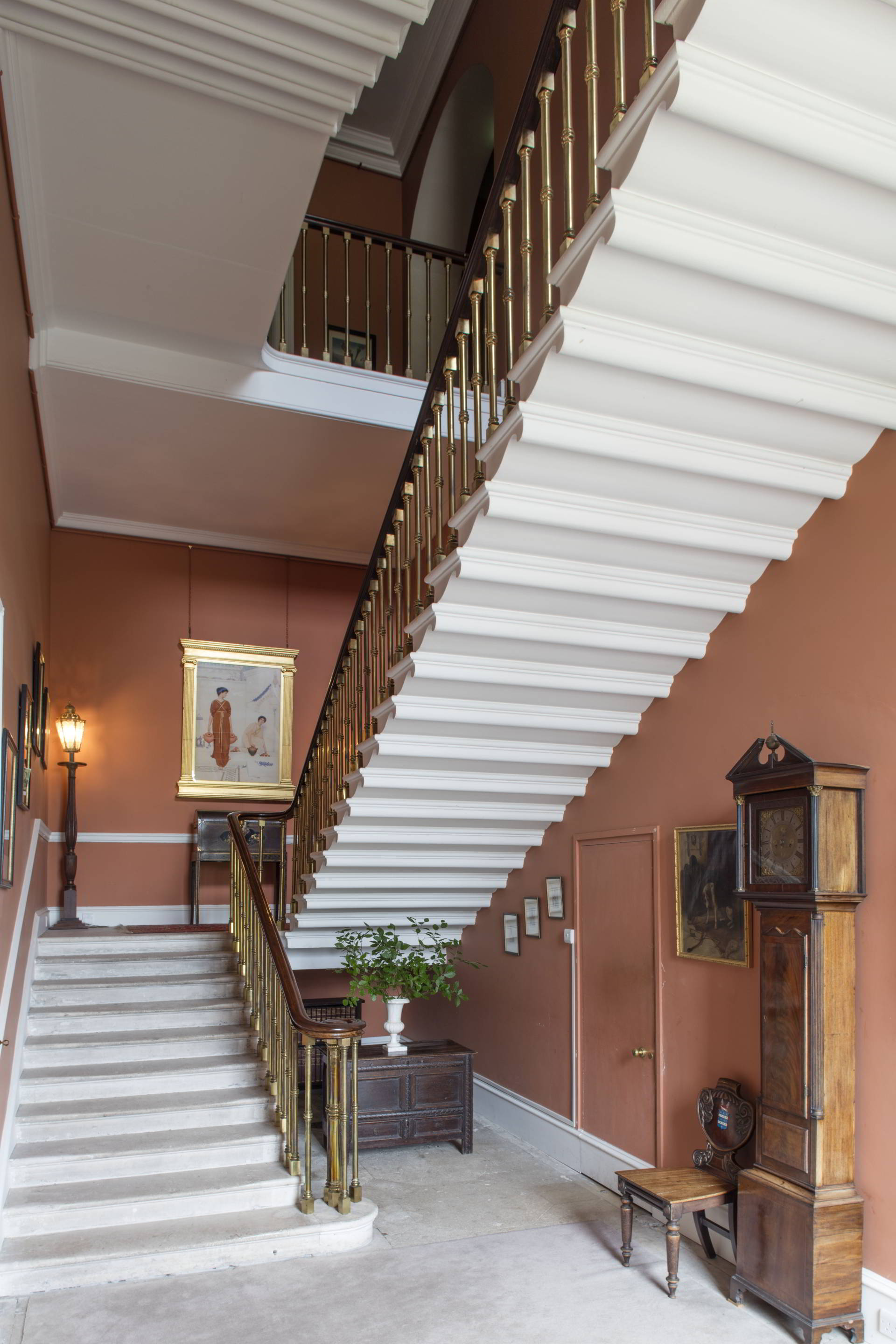